A GROUP of Adelaide entrepreneurs is seeking to raise up to $US25 million to develop a cloud storage platform it believes can compete head-to-head with giants such as Dropbox and Google Drive.

Cryptyk is described by its founders as “the world’s most secure cloud security and storage system” and is being developed by a team of tech and cybersecurity experts in Adelaide and Silicon Valley.

The team is led by chief executive and quantum physicist Dr Adam Weigold, who established laser business Photonica in Adelaide before relocating to Silicon Valley in 2011.

He is supported by a global team including marketing and business development specialist Luke Lombe, computer scientist Daniel Floreani and cybersecurity expert Derek Grocke, who all operate from Adelaide.

A prototype has been built by the Cryptyk team but it is now seeking additional funding through an initial coin offering (ICO) to develop the blockchain-backed technology into a final product. An ICO allows funds to be raised anonymously over the internet by issuing newly created digital tokens.

It is developing an experiencebased digital game known as Forever Has Fallen, in which players communicate with characters and other players via social media, text messaging, email and other media.

Mr Lombe, who has spent much of the past decade working as a consultant in China and the US, said the Cryptyk platform’s cybersecurity features e , backed by blockchain technology , offered a point of difference in the market.

“We are creating the most complete cybersecurity and cloud storage platform in the world,” he said.

“For our enterprise users it is taking away a significant amount of the cost and complications. Usually you would have to use three or four softwares linked together to reach even close to the same effect that we’re achieving with one.

“It is so far and away more secure than anything else on the market – it’s a game changer.”

Cryptyk’s Vault storage platform encrypts uploaded files and “shards” them into five segments. It then re-encrypts each segment before storing them on separate cloud platforms such as Dropbox and Google Drive.

A blockchain platform known as Sentry is then used for auditing, tracking and monitoring all user access and file sharing.

Cryptyk has already been named one of Enterprise Security magazine’s top 10 start-ups for 2018, and last year took out the cybersecurity award in the University of Adelaide’s eChallenge program.

“In terms of compliance and in highly regulated industries like finance, healthcare, education, media and construction, you have a really robust platform that is basically unhackable, with a record book of every transaction on the network that can’t be changed either ,” he said.

A private pre-sale period is currently open, with accredited investors being offered Cryptyk tokens at US10c each until April 20. A public sale campaign will kick off on May 1 at a price of US12.5c.

The ICO caps the total number of tokens to be issued at 750 million , with a third being offered to external investors, a third to company management and seed investors , and a third to the Cryptyk Foundation.

The foundation will be used to recruit new users to the platform, to incentivise third-party software programmers and developers to build add-on features to the technology , to develop partnerships with other tech companies and to maintain liquidity in the secondary market.

Mr Lombe said the tokens would be used by clients to purchase subscriptions to the Cryptyk platform, with their value expected to increase over time as platform usage and popularity increases.

He said a minimum of $US3 million in funding was needed to progress development of the product, with a maximum of $US25 million to be raised.

Once the public sale closes on June 1, Mr Lombe said plans were afoot to establish a head office in Silicon Valley, supported by offices in Adelaide, New York and the digital currency hub of Zug in Switzerland . The product is expected to be released to the market in mid 2019.

“What this gives us is a nice international footprint from a business development point of view,” Mr Lombe said.

“It also gives us a great presence from a talent perspective. We’re looking to have an office here (in Adelaide) with support staff, with business development and potentially with programmers and developers as well.”

He said Cryptyk’s management team had pre-empted potential regulatory changes in the ICO market, which was currently “flooded with scammers” .

“There are a bunch of companies popping up where the blockchain aspect is completely redundant and irrelevant , and it’s just a cash grab,” he said.

“I’d put a caveat out to anyone who’s looking to invest in an ICO to thoroughly do your research, make sure that it has a strong team of qualified people , an excellent product offering that’s solving a real-world problem with a viable market and the potential to monetise that market.” 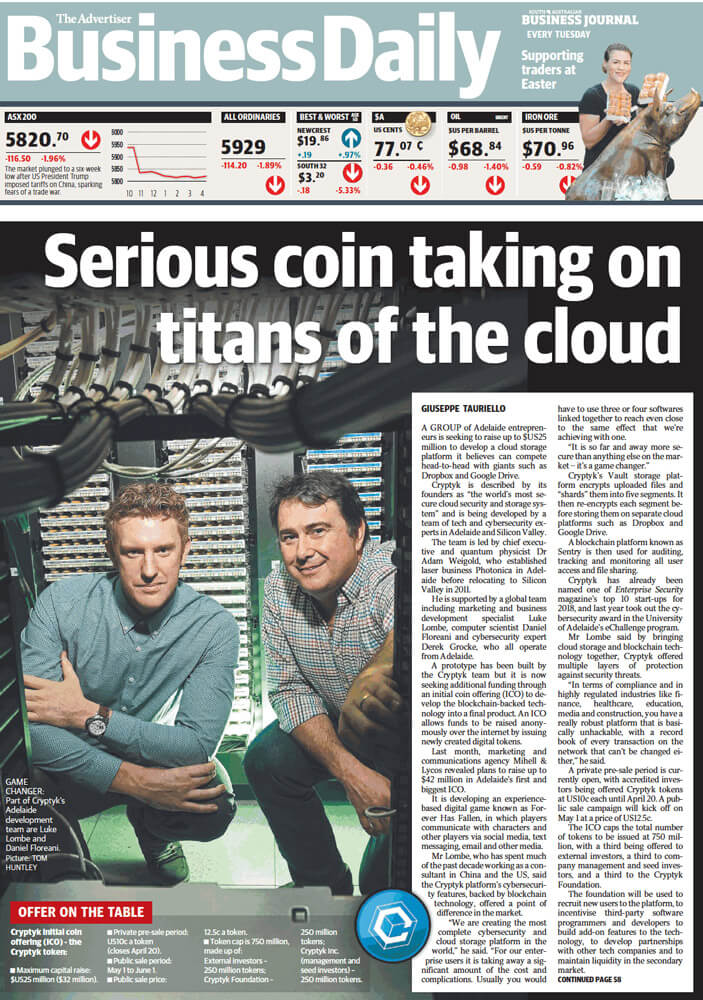 This article is from the March 24 issue of The Advertiser Digital Edition.

Join the discussion as we continue our initial token offering. Our community grows by a transparent grass roots movement, get involved and help us change enterprise security forever!

Discuss and follow
Join our growing community discussion and track updates on our channels.

Bounty Program
We aim to grow our community via transparent, grass root movement. Our goal is to be the gold standard in the cyber security world and community. If you believe in our project, and want to get involved spreading the word, check out our bounty program and earn free tokens from pool of 2.5 million CTKs by sharing us on your networks. See the Cryptyk Bounty for more information

© Corporate and Legal Information
Cryptyk Inc is a US based company incorporated in Nevada and headquartered in San Francisco, California.
Cryptyk Inc has non-US staff and resources in Tallinn, Estonia and Adelaide, Australia.
Cryptyk, Cryptyk Vault, Cryptyk Sentry, Cryptyk Cloud, Cryptyk Token and CTK Token are registered trademarks of Cryptyk Inc.
All images, content and media on this site are either property of Cryptyk Inc or public domain.

* Forecasts and estimations of future CTK Token Price published here and in supporting pdf documents are for instructional purposes
only to demonstrate the potential effect of token utility on token price. Published images or data that include forward-looking estimates of
CTK price over time are not a guarantee of future CTK pricing behavior. Cryptyk Inc. accepts no liability for any damages or financial losses
incurred by investors via the purchase or sale of CTK Tokens via direct transactions or on secondary crypto-currency exchanges.

CTK Tokens issued via our Token Sale in 2018 fully complied with all SEC regulations for US citizens. Furthermore, the CTK Token Sale was not marketed to US investors and no solicitations were made to US citizens or residents.