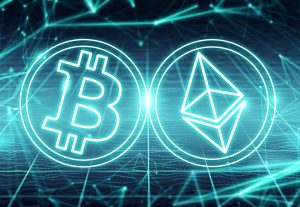 The Smart Hedge against Bitcoin and Ethereum

The Inevitable Fall
After Bitcoin and Ethereum prices rocketed to stratospheric levels in late 2017, recent falls over the last few weeks have hit fast and hard. After quadrupling their price through November and December both currencies have lost two-thirds of their value in just 2 short frantic weeks. Things seem to have stabilzed for now, and even a slight rebound has been observed. Most of the recent gains were exposed as market hype, and most currencies will ultimately move towards their true price based on future growth potential and function. However, the wolves have now been exposed and the sheep are very nervous again.

As quickly as crypto-currency had penetrated the mainstream consciousness for the first time, it has just as quickly damaged its public credibility. While Bitcoin might again be worth $20,000 in a year or so, its immediate future looks decidedly shaky. Ethereum looks a bit more solid for future growth, given that it hasn't used up most of its long term growth potential Nonetheless, over the next 2-3 months most crypto-currencies are just as likely to fall by 50% as grow by 50%. Certainly no-one is hoping for more than 50% growth over the next few months, and many are expecting further falls. The decision for most holders of BTC and ETH is what do I do next?

The Pump-and-Dump Game
No doubt most crypto-currency investments are a risky proposition at best, and not for the faint-hearted investor. However the crypto-currency community has just been played by several big players and it should learn some lessons from the experience. All the mainstream market hype of November and December was just part of a classic pump and dump strategy that was very well executed. The same big players who control the major banks are the same big players who control mainstream news and media. So it was no surprise that when big money entered the market in late 2017, crypto-currency also began appearing on network TV for the first time.

The inevitable fall was always going to happen in January when the wealthy profiteers needed to cash out their crypto in the new financial year, thereby deferring their tax on capital gains until next year. For the clever trader the last 2-3 months of investment has just yielded 200-400% gains or more. For mainstream investors who were late to the party they have just experienced the same in losses. So the sheep are now nervous and too scared to move in any direction. However the damage has already been done and the stability of the crypto market over the next few months wll be a fragile thing. The smart players are now looking for a hedge against the market, to guarantee no further losses and to lock in some more profit.

Where will the Smart Crypto go?
The problem with making huge gains investing in crypto-currency is how to cash out your winnings. Most of the major exchanges that convert crypto-currency into fiat currency (eg: USD, Euros) do so only at a snails pace and only exchange BTC or ETH. It can take over a month just to cash out a few hundred thousand dollars of BTC, and cashing out millions requires sophisticated brokerage networks. So the crypto-players who still have millions of dollars worth of BTC and ETH are now looking for a hedge or safe haven that is quick and fast. That means investing in another crypto or an ICO.

Unfortunately investing in smaller alternative crypto-currencies (or "alt-coins") does not offer any reduction in risk over the coming months. Almost all of the crypto-currencies launched via ICO's (Initial Coin Offerings) last year have experienced the same, if not more, volatile growth as BTC and ETH. Moreover, many alt-coins listed on exchanges have no real long term value and many will soon be exposed as scams. Listed alt-coins are the most dangerous place to put your BTC or ETH, at least until the entire market stabilizes and starts a new long term growth phase again.

The ICO hedge
The smart crypto-investors are now heading to the only place they sensibly can go ... the new ICO market. Recently launched or upcoming ICO's are now the ideal hedge and safe haven for BTC and ETH holders. The smart money is moving to new ICO's because of three compelling reasons:

1) Safe Havens for 3-4 months
New ICO's that have just launched may have 2-3 months until they close. Then another month or so until they get listed on some major exchanges. So until then their opening price is set at the price of the main public sale round. That means no possibility of any losses over the next 3-4 months, when hopefully the market will be more bouyant.

2) Guaranteed Returns for Pre-Sale investors
Professional and institutional investors have the funds to participate in the private pre-sale round that typically occurs before the public ICO round. The higher purchase volumes required for pre-sale rounds can earn significant price discounts and bonus deals. Investors in ICO pre-sale rounds can usually expect to realize guaranteed returns on investment (ROI) of 50% to 75% by the time the new currency is listed. In this environment, an automatic 75% ROI after only 3 months of investment is highly attractive to any large holder of BTC or ETH.

3) Improving ICO Quality
This years crop of upcoming ICOs are overall much better quality than last years. Greater regulatory scrutiny and a more educated investment community has meant that some of the most professional and exciting ICO's are now starting to emerge. Ultimately the ICO community has matured immensely over the last 6 months and as a result the quality of ICOs has needed to improve. Nonetheless there are still plenty of poor ideas, inexperienced teams and marketing scams to lose your money on. Investing in any ICO should require doing your own due diligence on the technology, the market landscape, the business plan, and most importantly the team. But now is certainly the ideal time to invest in that new ICO you have been researching.

Cryptyk ICO
At Cryptyk we have just launched our own ICO (see www.cryptyk.io). Our digital currency the Cryptyk Token (CTK) is the new crypto-currency for cyber-security and cloud storage. We have just launched our pre-sale round with several cyber-security professionals and CISOs already becoming some of our very first investors. When cyber-industry professionals and enterprise customers want to be our investors it is great validation for our technology and team.

For a complete description of the Cryptyk Token Sale download the Information Memorandum / White Paper. We think it is one of the most professional and transparent ICO White Paper documents yet published.

As a final bit of advice, while Cryptyk makes a quality ICO investment with a solid team, technology and vision, it should not be your only ICO investment. Sensible investment strategies dictate that it should be only one of many diversified investments across the crypto-currency space.